This is a sample module published to the sidebar_bottom position, using the -sidebar module class suffix. There is also a sidebar_top position below the search.
Appearances in other Movies and Media

Appearances of Sonic the Hedgehog in other Movies and Media

facebook
Email
Pin It
gplus
Reddit
***
Digg
twitter
Gshare
Sonic the Hedgehog has made several other appearances over the years, from television, to parades, to even movies. Below are a list of appearances, more will be added as I find them.

Macy's Thanksgiving Day Parade 1993
In 1993 Sonic made his debut in the famous Thanksgiving day parade held in New York City every year. He was introduced at the parade on NBC as the very first video game character at the parade, as a 65-foot balloon that took 4 people to hold down. He would later appear in the parade in both 1994 and 1995. Though reports also suggest that in 1993 that the winds picked up and pushed the Sonic the Hedgehog balloon into a lamppost, which caused it to explode and injure a off-duty police officer and 10-year-old girl from debris.

Sonic was also the first video game character to appear in the Rose Parade. 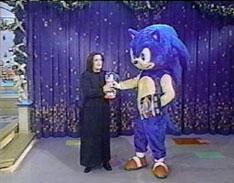 Sonic the Hedgehog made a appearance on the Rosie O'Donnell talk show around Christmas time in the form of a costumed person. Wishing everyone a Merry Christmas, everyone who attended that day also received a Sega Dreamcast as well.

Hitch Movie: Popsicle Background
In the Will Smith movie, Hitch, on the side of the ice cream truck, a picture of a Sonic the Hedgehog popsicle can be seen.

Jingle All the Way: Parade Scene 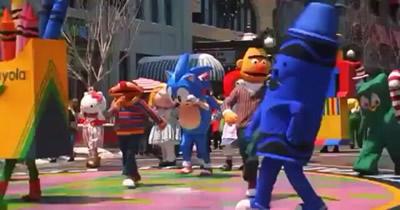 The Christmas-themed movie Jingle All the Way starring Governor & Terminator Arnold Schwarzenegger has a quick Sonic the Hedgehog appearance. Around the end of the movie where Jamie arrives at the parade, a costumed Sonic the Hedgehog can be seen marching with other famous characters.