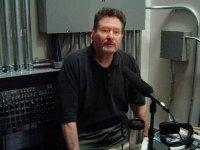 It is our unhappy duty to report on the passing of our dear, beloved chief writer of SatAM. Benjamin Hurst has died at the age of 59. The cause of death was reported to be a diabetic coma that he never reawakened from.

Ben was the chief writer of SatAM, and together with Len Janson, created the whole American "SatAM Sonic" universe. His impact on the fandom cannot be understated, as he transformed Sonic from being a video game sensation, into a cartoon and comic book juggernaut that continues to this very day (as of 2010), and without him, there would be NO American Sonic the Hedgehog, or SatAM, as we know it! Though SatAM is long gone from our airwaves and cable boxes, its spirit still lives on in the form of Archie's "Sonic the Hedgehog" comic book series — a direct inspiration from Ben's cartoon show, featuring all of the same characters and locations.

After SatAM ended, he even attempted to use many of his ideas for SatAM in the first few episodes of Sonic Underground, when he was chosen to be the writer for that show in 1995. However, due to creative pressures and differences with DiC, he would part ways. After Sonic Underground ended in 1998, Ben became more active within the SatAM Sonic fandom, and had gone above and beyond what most staff members would do in terms of keeping in touch with the fanbase. In 2005 and 2006, he even answered questions at the Sonic Amateur Games Expo (SAGE). His last known film credit (writer or otherwise) would be his 2007 interview for the SatAM Sonic the Hedgehog DVD box set, relased by Shout! Factory.

In later years, he would maintain and display exhibits at the Smithsonian Museum, in Washington, DC, United States.

Ben's full filmography is below: